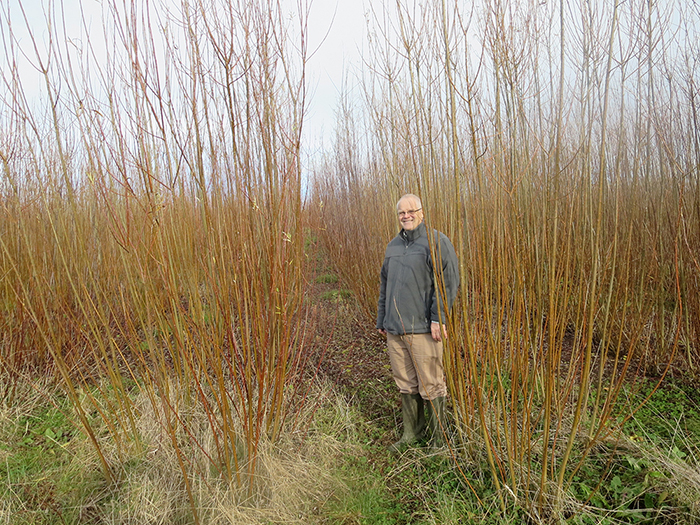 Gurteen College is one of the first agricultural Colleges in Europe to grow short rotation coppice (SRC) and use the fuel to heat their buildings. The college installed a 300 kilowatt (kW) KWB biomass boiler in 2010 to supply space and water heating to the various buildings on site via a district heating scheme.

The college is well subscribed with 200 agricultural students, 100 equine students, 40 night class students and 100 distance learners.
The college farm covers 414 hectares and there are 130 Friesian cows, 270 beef cattle, 600 sheep and 24 horses. The farm has over 80 hectares of tillage land and of this, 32 hectares of SRC willow was planted in 2010-11. This single large plantation is situated less than 1 km from the boiler. When the SRC crop is fully mature the college will be completely self-sufficient and no longer dependent on bought in fuels.

The annual woodfuel requirement is around 320 tonnes per year. As well as heating the buildings, the biomass boilers is connected to a drying shed which is used to reduce the moisture content of the SRC chip from 55% to 25%.

The Gurteen College biomass project was the brainchild of the principal Mike Pearson who joined the college in 2000. During the early years of his tenure Mr Pearson saw the heating costs of the college spiral. By 2009 the college was spending €60,000 on peat briquettes and €10,000 on oil. At this time the oil boiler was also coming to the end of its life.

The College underwent an extensive energy audit as part of Sustainable Energy for the Rural Village Environment (SERVE) Project. Eight energy efficiency and renewable energy measures were recommended with the objective of reducing energy usage by at least 50%. The college began implementing these recommendations in 2010. As well as the 300 kW biomass boiler the college also installed a 50 kW wind turbine.

When Mr Pearson proposed the installation of the biomass system to the board of trustees, there was concern expressed that bought in wood chip would track the price of oil. Mr Pearson saw SRC as an ideal fit to keep future fuel costs low. He also looked at miscanthus as an option but decided there were too many issues involved.

32 hectares of SRC was planted (as two plots of 16 hectares in the springs of 2010 and 2011). Whilst the SRC plantations were maturing the college bought in cord wood and chipped this themselves to keep costs low.

The land now occupied by SRC was previously used to grow spring barley, a venture that consistently lost the college money. By contrast the production of wood chip fuel has considerably reduced the college’s overheads.

The project used one contractor (Rural Generation Ltd) to do everything – to plant the SRC, install the boiler and the drying floor. This was a very good decision as the company understood the complexities of the fuel and how to process it and had a very good track record of successful projects. Also, the turnkey offer meant that one person was responsible for managing the entire project. This was particularly attractive as it enabled Mr Pearson to spend more time on his day to day college activities.

The land preparation was exemplary and as a result the SRC achieved an excellent establishment. A mix of UK and Swedish varieties were planted and grown in mixtures in order to guard against future disease and pest issues. Mr Pearson did some post planting surveys, counting the number of established plants per 100 and the plantation regularly achieved 95%.

The SRC is harvested in late February early March. 50% of the plot is harvested every two years and takes around two days. The harvester is situated 45 miles away. Wood chip material is moved directly to the drying shed measuring 16 x 14 m. The total floor area is 255m2 and the chip is stacked at 4-5m high. The drying period is 10-12 weeks. It is possible to get 200 tonnes of dry product in the shed so a surplus will need to be kept elsewhere until space is available. After harvest the field is fertilised with slurry produced by the farm animals. 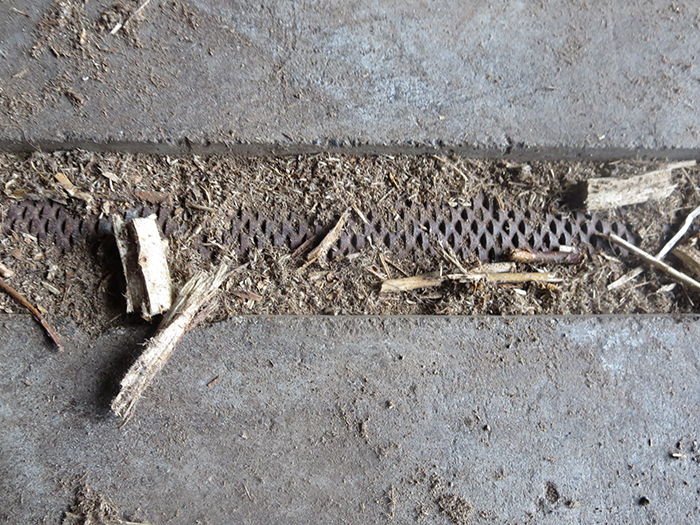 Warm air is distributed by vents under the chip pile

Mr Pearson initially had to put in a lot of effort to get stakeholders (Trustee and governors) on board. This was partly due to the fact that the college’s previous experience of a straw burning boiler in the 1980s had been an expensive investment that didn’t work. However, the success of the current project means that most are now keen converts.

Mr Pearson says “You have to love your boiler to make a project like this work for you. The fuel does have more stringy bits and a higher ash content. The management of the boiler is not particularly onerous but it helps to keep an eye on the system every day”. Both Mr Pearson and the caretaker Richard Hamilton live on site and drop into the boiler house daily. Typical tasks involve a 10 minute de-ashing every week and 3 hours cleaning required every 3 weeks. An auger jam takes 10-15 minutes to unblock. Sometimes there are no blockages for five weeks and other times there may be four in a week.

Although a good establishment was achieved the soil is a bit light. Water may be limited in dry summers and this could affect yields.
Part of the field had a weed issue in its establishment year and the necessary actions to deal with this meant that the harvesting schedule was altered although this is back on track now.

The turnkey installation costs for the district heating scheme was €300,000 although 50% of this was grant funded through a European energy efficiency grant. The cost of establishing the SRC was €2,500 per ha, a total outlay of €80,000 minus a 50% grant. The drying floor cost €80,000. This utilised an existing shed that had once been used to house straw for the straw boiler project. If a new shed had been required this would have cost an additional €40,000.

Of course the opportunity costs involved in the lost income from food production should also be considered but Mr Pearson says “I’ve tried hard but I can’t find anyone in Ireland who can make money from growing spring barley.” Nevertheless, even if the economics allow for €10,000 per year opportunity costs and €10,000 depreciation, the project still enables massive savings. It is at least €17,000 per year cheaper than bought in woodfuel and €47,000 per year cheaper than oil.

The project paid back the outward investment in 4-5 years. 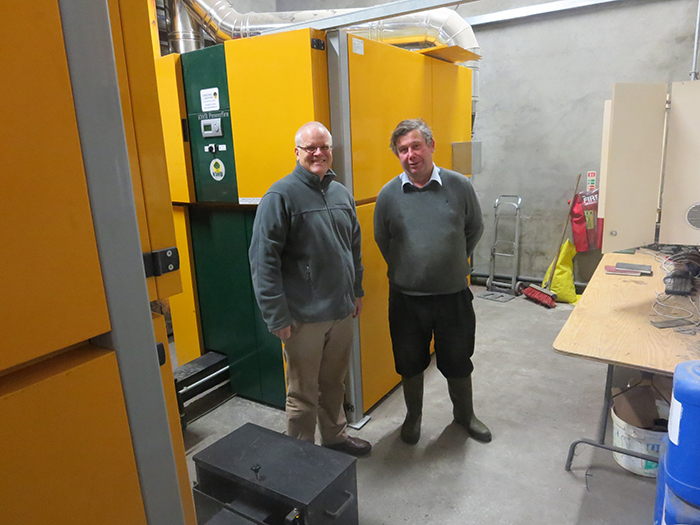 Principal Mike Pearson and Richard Hamilton with the KWB boilers

The college would like to further explore the potential to use the SRC for phytoremediation of all the waste liquids produced on site such as parlour washings, yard run off, septic tank run off etc. This would require an investment of £180,000 in a lagoon and irrigation system. This would boost the SRC yields and reduce water treatment costs.