An eco-friendly alternative to heating the home and business 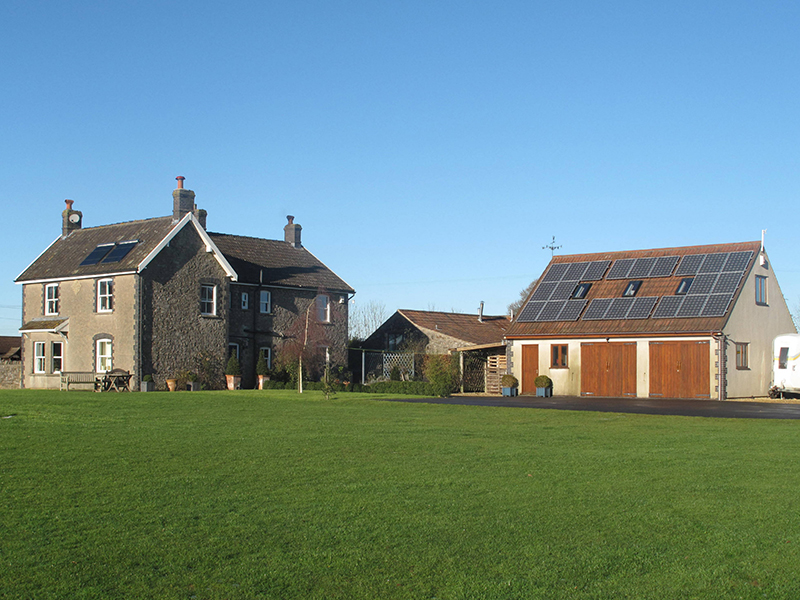 Richard and Tracy live in a five bedroom house in Somerset. Tracy has an office above the garage as she works from home.

They had an Angus Orligno 200 40kW boiler installed three years ago and receive payments through the Renewable Heat Incentive (RHI) of which there are two types, Domestic RHI and Non-domestic RHI. As a business is run from the home they receive Non-domestic RHI payments.

They were finding it difficult to heat their house and office with the ever increasing oil prices. Because of the high cost they found that they were living in a cold house and could only try and keep warm by wearing many extra layers of clothing.

The challenges facing them were that the house was built in 1914 so it was single glazed and had solid walls meaning there was no cavity space in the walls for insulation. It was also very exposed as it stood on top of a hill. The fuel used for heating, hot water and cooking, using only an aga, was oil which was expensive with the price rising dramatically each year. Due to their location gas isn’t available. This all meant that the house was extremely cold. It was not easy to heat in the first place and then very difficult to retain the heat and they were facing huge oil bills every year.

There were a few measures Richard and Tracy were able to take to make conditions slightly more bearable. They double glazed the windows, stopped using the aga, took it out and instead used an electric cooker and changed over to solar thermal to heat their water. They also had a wood burning stove installed in the kitchen/diner. However, even with all these changes, the house and office were still very difficult and expensive to heat.

It was hugely important to them that the result would be eco-friendly and cost effective so they undertook a huge amount of research to find an alternative way to heat and provide hot water for their home and office. One consideration was anaerobic digestion which involves burning methane from things that are decomposing. They looked into this and if they had gone ahead they would have been the first people to have tried it in the country. They decided against it as they were unsure if it would work.

Another possibility was pellet boilers but pellets were only available to buy from Norway at that time so they felt that there could potentially be a problem with cost and availability of good quality pellets. Through their research they also realised that with pellet boilers there was so much more that could go wrong.

Richard and Tracy had come across wood boilers and had a friend who had one installed. They looked into how the boilers worked and liked the fact that they could have the flexibility of acquiring their fuel from anywhere and from different sources. They felt that this could be the eco-friendly, cost effective and reliable solution they were looking for.

They then looked at different types of wood boilers from different suppliers and came across Eco Angus at the Royal Bath & West Show. In comparison to other suppliers’ boilers, they were impressed with the Eco Angus boilers as they were more low tech, less complicated and therefore seemingly more straight forward, cheaper and easier to maintain. 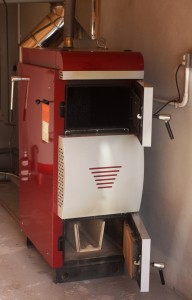 After talking to the Eco Angus team and comparing notes with a friend of theirs, another customer of Eco Angus, they decided to have the Angus Orligno 200 40kW boiler along with a 2000l Akvaterm thermal store installed.

Richard and Tracy were given Eco Angus’ list of nearby accredited installers. They decided on using Celtic Renewable Energy as they felt that they understood their need to charge the boiler using the already installed solar thermal energy.

Initially there was uncertainty about where the boiler ought to be installed and the couple were glad that they put off the installation until they were happy with the location. Click here for more information on boiler positioning.

Once the location was agreed they were extremely happy with the installation process and said ‘the installers did a great job’. 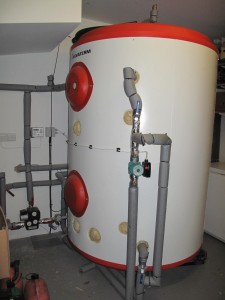 They likened running the boiler it to owning a horse: ‘There are many different ways to do things. You can’t leave it. You can be quite particular about how you look after it. It can take a while to get to understand the best way. We took a little while to really get to grips with it but now understand it well, especially with the Eco Angus videos which we found very informative and helpful.

‘It is a lifestyle choice. It’s a lifestyle which we enjoy, sourcing wood, going in the woods, chopping the wood, feeding the boiler. It is like a hobby’.

Since Richard and Tracy had their boiler installed we have produced instructions on running a boiler. There are also instruction videos online.

‘The boiler is very efficient, there’s plenty of hot water and the house is now nice and warm’.

There was a possibility of having a 25 kW rather than the 40 kW and they are very glad they chose to have the 40 kW as this enables the whole building to get warm quicker.

Richard and Tracy have found numerous benefits from using the wood burning boiler. Apart from the great advantages of it being cost effective and it working very effectively, they have found running the boiler to be very therapeutic and it keeps them fit.

They feel that the research and messing around with wood, i.e. experimenting with different ways of preparing wood, going to the woods to collect, cut up and season, is like a hobby to them.

A great benefit is that they can be given fuel by local people. They have been given blown down trees, their friend has fruit and veg stall so they help him out by burning his fruit and veg crates. ‘So many benefits whilst spending less money’. 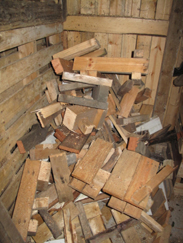 ‘It has definitely been value for money especially with the Renewable Heat Incentive payments’.

Before the installation of the wood burning boiler system the cost of oil per year was £2,000. They burn approximately ten tonnes of wood yearly which costs on average £1,000 per year. Already a saving of £1,000 in fuel cost. The cost of the installation of the boiler and the thermal store cost £15,000 in total. Through the RHI they are paid 8.8 pence per kW hour for up to a maximum of 52,560 kW hours per year for 20 years.

*Note that if Richard and Tracy used their full tier 1 allowance of a maximum of 52,560 kW hours the time taken for the boiler to pay for itself would be just under 3 years.

An Eco Angus wood burning boiler as an alternative to gas, electric and oil heating and hot water: 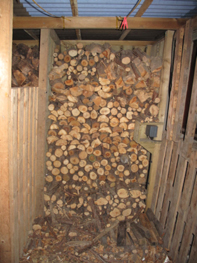 All our boilers are fully accredited under the Microgeneration Certification Scheme (MCS) and as a consequence there are grants available for our boilers under the NDRHI.

The Non Domestic Renewable Heat Incentive (NDRHI) commenced November 2011. Currently the tariff pays 7.6p per kWh for the first 1314 peak hours of the nominal rating of the boiler and 2.0p per kWh thereafter.

This would work out as £3995 per annum if the full tier 1 allowance for a 40kW boiler is used. It would be paid quarterly, tax free, and Retail Price Indexed (RPI) linked over 20 years. It is important that any installation below 45kW is installed by an MCS approved installer.

The most recent Non Domestic RHI announcement can be found here.