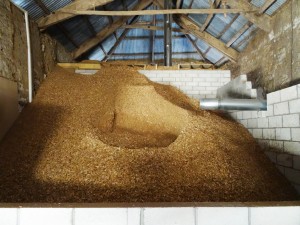 Umberleigh Barton Farm is a working mixed farm situated in North Devon. The owners of the farm business have installed a biomass boiler to supply space and water heating to six residential properties. Two of these are occupied by the Andrew family whilst the other four are occupied by tenants.

A 130 kW Eta boiler was installed in August 2013 by Dunster Biomass Heating. Currently the family are buying in wood chip but the intention is to become entirely self-sufficient by using 14 hectares of existing undermanaged woodland and a new plantation of short rotation coppice (SRC) willow. The annual woodfuel requirement is around 56 tonnes at 30% moisture content.

A 3.95 hectare plantation will be planted in 2015. The production from SRC should provide an assurance that sufficient woodfuel would be available in the eventuality that the tenants and Mr and Mrs Andrew use more heating than predicted. Also, it should provide enough fuel for additional buildings if the district heating scheme is expanded in the future.

Mr Andrew got specialist help looking at the feasibility of a biomass boiler installation and potential for SRC on his land from Kevin Lindegaard of Crops for Energy. The two days of consultancy support was partly funded by the farmer (30%) and the balance was paid by Resource Efficiency for Farmers (R4F) scheme run by Rural Focus. A feasibility study and business case was completed in November 2012. Four boiler installers were invited to quote and a decision was made in February 2013. The boiler was installed in August 2013.

The economic viability of the project depended on the boiler installation being accredited by the UK Government’s non domestic Renewable Heat Incentive. This pays a set tariff for all eligible renewable heat consumed in the various properties. The application was made by the installer in August 2013 and accreditation was achieved 11 weeks later. So far the Farm complex has consumed and been paid for 110,000 kWh of heat.

In addition, Mr Andrew wanted to establish the SRC crop with financial support from the Energy Crops Scheme offered by Natural England. This pays 50% towards the establishment costs of SRC willow but has a minimum planting area of 3 hectares. The scheme ended in September 2013 but Mr Andrew’s application was approved before this date and therefore can be planted in the spring of 2015.

The project has run very smoothly. Mr Andrew was very impressed with the detailed quote offered by Dunster Biomass Heating and the professional service offered before, during and after the installation. 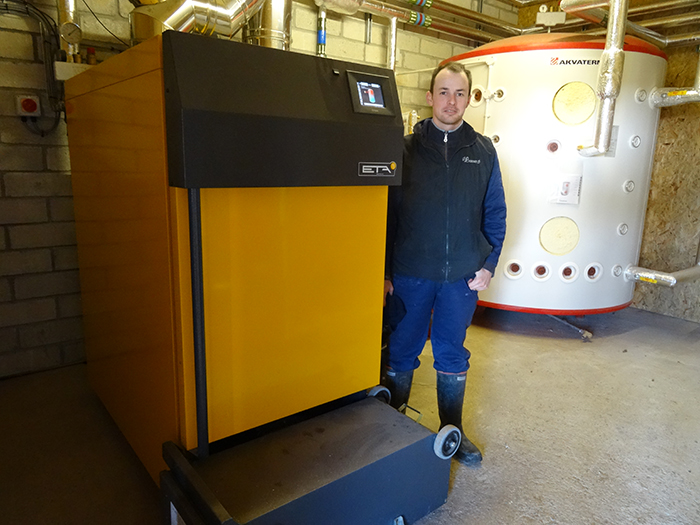 Mr Andrew with the 130 kW boiler

The biggest hurdle facing would be energy crop growers in the SW of England is the lack of infrastructure to plant and harvest SRC. The plantation design will have wider spacings (0.5 m in the row and 2 m between rows) to give a stocking density of 10,000 plants per hectare. This will enable thicker growth over a three year rotation and provides the flexibility to harvest manually if a local harvesting machine doesn’t become available in the future. It should be possible to harvest a third of the plantation each year with a chainsaw in 5.5 man days. Clearing the harvested rods could be done with a telehandler and should take 2.25 man day per year. The rods will be dried in elevated piles – the air circulation between the rods should be sufficient to allow outside drying. Once the rods have dried down to 30-35% MC they should be chipped with a hired in drum chipper. This should take around 2 man days per year. The quality of willow chip will be poorer than that produced from more mature woodland as it will have longer shards and more bark. Hence, it will be mixed in with the roundwood chip. The ETA boiler has a rotary chopper to cut oversize material so that it doesn’t clog the feed mechanism and cause a boiler breakdown.

Mr Andrew had hoped to plant the SRC crop in the spring of 2014. However, a long delay in the ECS grant approval process meant that this was deferred until 2015. Although, this delay was annoying Mr Andrew preferred the option of taking extra time to ensure the land preparation and pre planting weed control was done to best practice protocols.

During the first year of the project Mr Andrew decided to buy in wood from a local supplier. The feasibility study had suggested that Mr Andrew would be paying around 2.9-3.2 pence/kWh for bought in fuel. In actual fact the cheapest price he could find was much more expensive at around 3.6 pence/KWh delivered. Unfortunately, the popularity of the RHI scheme and the shortage of available woodfuel and suppliers had pushed up the price quite considerably in the space of a year.

The turnkey installation costs for the district heating scheme was £98,000.

Based on annual fuel savings of £5,700 per year, operations and maintenance costs of £2,275 per year and an annual RHI rebate of £14,400 the investment should be paid back in 5.5 years. Over the 20 year lifetime of the RHI the farm could be better off by over £250,000 based on current oil prices. This presents a return on investment of over 13%.

The annual fuel savings (compared to oil) will be maximised by selling heat to the tenants as part of an Energy Services Company arrangement (ESCO). Each property has their own heat meter and pay for each unit of heat that is used.

The establishment costs of SRC are likely to be quite high at around £4,000/ha although 50% of this will be paid for by the ECS grant. The cost of rabbit fencing alone is around £1,850 per hectare but is likely to be a worthwhile expense in order to give the crop the best possible start. Over a 22 year period, it should be possible to produce SRC wood chip for around £60/tonne at 30% MC or 1.9 p/kWh if the establishment, management, harvesting, storing and chipping costs are spread across this period. Even with all the work required this is a massive saving compared to oil.

Mr Andrew has so far achieved an exemplary project by taking a considered, stepped approach to various activities. By employing the services of a specialist advisor Mr Andrew was aware of the hurdles involved in self supply with SRC from the outset. Rather than get to grips with the new boiler and try and self-supply from the outset he chose to buy in fuel and will gradually progress to using the farms own supply. The decision to delay planting the SRC crop will ensure that the crop has the best chance of success and achieve high yields.