A year into the Domestic RHI (DRHI), biomass has performed well. The most recent DECC numbers show that 4,801 biomass systems have been accredited since the launch of the scheme (plus an additional 1,141 applications awaiting Ofgem approval). 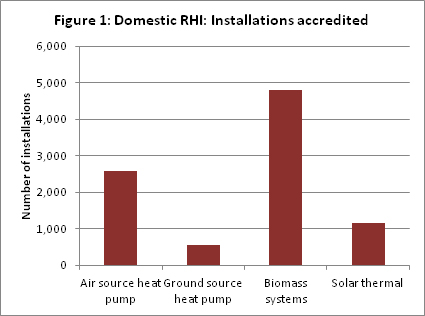 The average size is 26.6kW for newly installed biomass boilers under the DRHI – larger than air source heat pumps (10.6kW) and ground source heat pumps (12.8kW). As RHI payments are based on the EPC heat load figure, and thereby deemed, there should be no incentive to over or under size boilers. The figures clearly imply that biomass boilers are typically installed in larger houses, which require a higher heat load to warm the house.

Unlike the CfD auction process where different renewable technologies compete against each other on price and for funding, the DRHI has dedicated budgets allocated to each technology (see table 1). Consequently, deployment of one technology does not affect funding available to others.

Should one technology deploy more than expected, the tariff would be degressed for new installations of that technology, which makes it less financially attractive for consumers.

Despite biomass reaching its budget triggers twice (and being degressed twice), biomass boilers are only slightly over-deploying compared to DECC’s expectations as illustrated in figure 2. Despite the number of biomass installations is broadly as expected, the capacity and the heat load are larger, which has caused the two degressions. 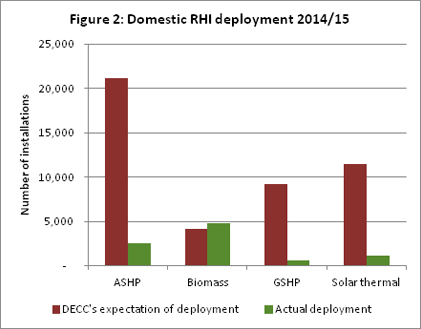 The real problem of the DRHI is the considerable underperformance of the other technologies. It is difficult to assess whether GSHP, ASHP and solar are being held back by MCS requirements, Green Deal Assessment and/or the exclusion of new build, but these elements do have a negative impact on the deployment of non-biomass technologies. It has also been argued that non-biomass tariff levels are too low – although tariffs for ground source heat pumps and solar thermal are currently more than double those available for air source heat pumps and biomass (figure 3).

The Domestic RHI was aimed at off-grid households, which typically use more carbon-intensive fuels (i.e. oil, LPG, coal and electricity) and have higher fuel costs. As illustrated in figure 4, 85% of biomass boilers are installed in off-grid households. Biomass displaces a higher proportion of the more carbon intensive fuels than the other technologies – which may reflect both its high concentration in off gas grid homes and that those homes are relatively large (figure 5). 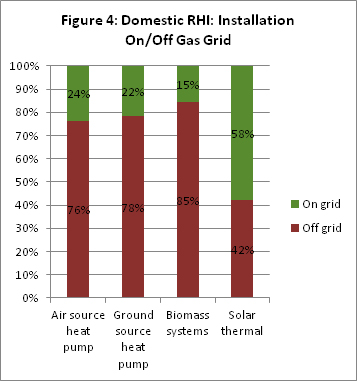 Sustainability criteria for biomass are scheduled to be implemented in October 2015, which will require all biomass installations to demonstrate a minimum 60% GHG saving compared to EU fossil heat average – although actual savings are likely to be higher.

One year in: What now?

After a year, the domestic RHI has supported and incentivised a good uptake of biomass boilers, installed in off-grid households and displacing carbon intensive fuels. However, the DRHI has not proven to be attractive enough for heat pumps or solar thermal. If the UK is to reach its 2020 renewable heat target, it is essential that biomass continue to deploy well AND the other technologies start deploying at significantly higher levels. Heat is responsible for a third of the UK’s carbon emissions, and if we are to prevent climate change, the rollout of low carbon, renewable heat is of paramount importance.