Tredethick Farm Cottages located in Lostwithiel, Cornwall is using miscanthus grass as a fuel to provide district heating to 8 holiday lets, a farmhouse and a swimming pool. Crops for Energy was commissioned by the farm owner/proprietor Tim Reed to assist in the initial feasibility study and subsequent management of the project. The first two days of technical support were provided at a discounted rate through the Resource Efficiency for Farms (R4F) Scheme managed by Rural Focus.

Background
Previously, the farm enterprise used 32,000 litres of oil costing around £19,000 per year. The main drivers for installing the biomass system included the rebates offered by the Renewable Heat Incentive (RHI) and the cost savings of woodfuel compared to heating oil. In addition, a centralised boiler would enable the ugly oil tanks to be removed which would improve aesthetics and free up space around each building. By growing their own fuel the farm will be self sufficient and also insulated from future fuel price rises. 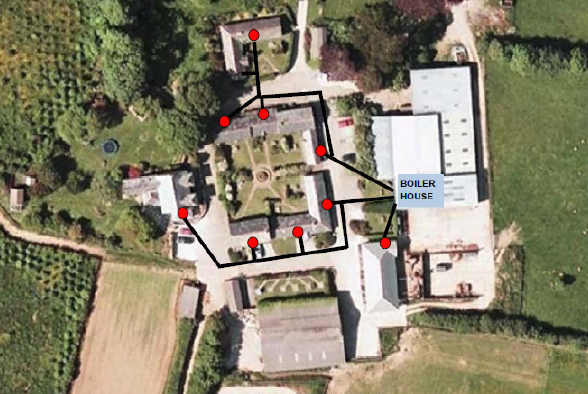 Boiler choice
The initial feasibility study was carried out in August 2011. It was decided that the site was viable and that an existing barn would provide a suitable location for the boiler and fuel store. There are only a limited number of small scale heating systems available on the market that can use miscanthus chip. This is because miscanthus has the following combustion characteristics:

Four companies were approached for turn key installation quotes. The chosen system was a 199 kW Eta Hack wood chip boiler installed by Fair Energy Ltd who are based in Exeter. Eta boilers can deal with the challenging nature of miscanthus fuel.

Miscanthus chip is much less dense than normal wood chips and therefore this requires more storage space. Most of the miscanthus chip produced by the farm will be accommodated in the existing barn. Another disadvantage of using miscanthus as fuel is that its low density means that it is not possible to physically get enough fuel into the combustion chamber for the boiler to achieve its full capacity. As a result the ratings of boilers are downgraded so a 199 kW boiler has an output of 140 kW when using miscanthus.

The boiler, fuel store and heat distribution system was installed in 5 weeks from late December 2011. The most disruptive elements of the installation such as digging the trenches to lay the heat main were carried out in January which is the one point of the year when the holiday lets are unoccupied.

Fuel Supply and Storage
The district heating scheme requires around 340,000 kilowatt hours (kWh) of heating per year. From 2015 onwards this will be provided from just 5.7 hectares of miscanthus that was planted on the farm in May 2012. An establishment grant providing 50% towards the cost of planting was awarded by the Energy Crops Scheme (ECS) managed by Natural England. Until the crop reaches maturity, miscanthus chip will be purchased from an existing local grower.

Left: Miscanthus being planted at Tredethick Farm in May 2012.
The barn and holiday lets can be seen in the background.
Right: A mature miscanthus crop

The field growing the miscanthus is adjacent to the barn containing the boiler. As a result, when it is harvested the miscanthus chip need only be moved 420 metres from the furthest point. Once the crop is established the only cost to the farm will be its harvesting and some annual fertiliser inputs.

A 40 m3 fuel hopper (5m x 2m x 2m) needs to be filled 25 times a year with a front end loader. In summer this needs filling every 3-4 weeks whilst in the winter it might require filling every week. The ash pan is emptied every week and used as fertiliser on the field where the miscanthus is planted.

Capital and Operational Cost
The overall capital costs of the boiler installation, energy crop planting and project management was £171,040.

It is possible to establish, manage, harvest and store miscanthus chip for around £45/tonne if the costs are spread out over 16 years. This includes the ECS grant and allows for lost revenue from a conventional food crop. By replacing heating oil with miscanthus chip it might be possible to save over £14,000 per annum based on current prices.

The Government’s Renewable Heat Incentive (RHI) will provide an annual rebate to producers of renewable heat. The application for RHI accreditation was made to Ofgem in February 2012 and approval was granted in May 2012. The Tredethick boiler project is one of the first in the UK to be approved using an energy crop as a fuel. The table below indicates the potential returns from the scheme. Payments will be made on a quarterly basis.

The total savings and revenue produced by the scheme are £35,827 giving a simple pay back of 4.8 years. Over the 20 year tariff period the system could generate a net profit of around £544,000 based on current fuel prices. 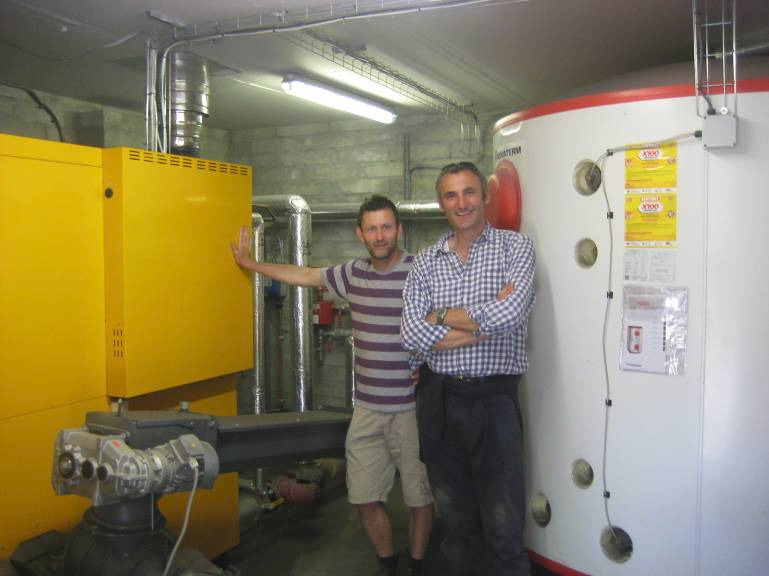 How Crops for Energy helped
During the project we have assisted Tredethick Farm Cottages in the following ways:

For Tredethick Farm Cottages it has been a smooth ride with very little hassle. Crucially they have not had to try and learn everything about bioenergy – they’ve simply employed us as trusted advocates to help them make the right decisions.